Visions for Culture in a Sustainable Future will fund 7 artists with €2,000 to work individually or collectively and share their visions for culture in today’s changing world. 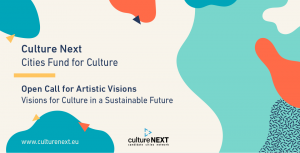