Craft NI’s Craft Advisory Panel was appointed, based on maker nominations, in 2020. Selected every three years, the Panel is an important element of Craft NI’s links to and communications with the sector. The Panel provides advice and insights to inform the development of Craft NI’s strategies and action plans, based on its members’ knowledge, experience and expertise in their own craft discipline(s) and through contacts with other makers in those disciplines.

Thank you to all makers who nominated members towards the end of 2019 and to the following panel members who are contributing their time and experience to the development of the sector. 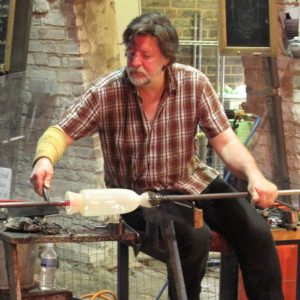 Scott  Benefield is internationally known as a glassblower specialising in Venetian cane techniques, as well as a workshop leader and a writer covering issues pertinent to contemporary studio glass.

Scott has exhibited his work at the Royal Ulster Academy annual exhibition in 2012-2015, the British Glass Biennale in 2015, as well at galleries in Ireland, England, Scotland, the US, the Netherlands, Japan and China.

In 2013 he was given a Queen Elizabeth Scholarship Trust award, and has been the recipient of residencies at the Corning Museum of the Glass and the Toledo Art Museum. In 2015 he was awarded the second Rosemary James Memorial Bursary by the Arts Council of Northern Ireland for his achievements in the field of craft.

He is a Lifetime Member of the Glass Art Society and currently serves on the Board of Directors of the Glass Society of Ireland.

He currently maintains a hot glass studio in Randalstown.

Jill Graham is a Northern Irish jewellery designer, inspired by organic structures and elements of plant life, specialising in producing high quality, contemporary jewellery. Born in Northern Ireland in October 1980, Jill trained at Loughborough University School of Art and Design, graduating top of her year in Silversmithing and Jewellery in 2002. Acquiring valuable skills during her subsequent apprenticeship to a goldsmith, she successfully set up her own business in 2003.

In June 2013 she was commissioned by 10 Downing Street to make an exclusive piece of jewellery to be presented to the 8G world leaders where she was able to present our Prime Minister with his own piece. Jill is also using her valuable knowledge and experience to help develop the craft sector in Northern Ireland by  being a member of Craft NI’s Craft Advisory Panel. 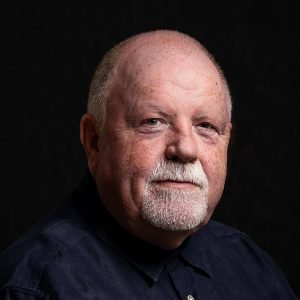 Rory Shearer is currently Specialist Lecturer in Ceramics at Belfast Metropolitan College, having studied Ceramics at the Ulster College of Art and Design, Belfast, Northern Ireland. Rory is an established Artist/Designer/Maker with his own studio in County Antrim, producing wheel-based vessel forms in Porcelain and Reduced Stoneware.

With extensive experience in and of the Craft, Applied Art and Design Sector in Northern Ireland, Rory was also a founder member and first secretary of The Guild of Designer Craftsmen (NI) and Crafts Development Officer with Craftworks. Rory is also the Chair of Craft NI’s Craft Advisory Panel. 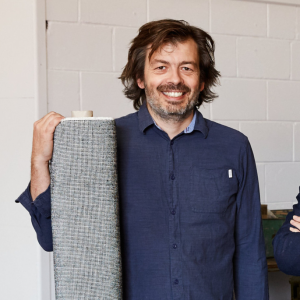 Mourne Textiles is a design-led manufacturer of handwoven products based in County Down. For three generations their Master weavers have produced the mid-century visions of Norwegian design pioneer and founder, Gerd Hay-Edie. Now led by Gerd’s grandson Mario Sierra, Mourne Textiles creates contemporary home furnishings inspired by a rich weaving heritage, rooted in the landscape and community of Northern Ireland – but with a contemporary, international, collaborative outlook. By harnessing the skills and traditions of the past with a modern, contemporary aesthetic, they create handwoven scarves, rugs and homeware products that acknowledge the rich heritage of weaving in Northern Ireland, while always maintaining modern relevance.
Close 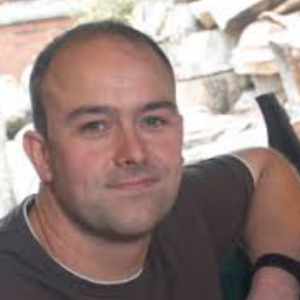 Mark Hanvey has been working with wood for over twenty years. His work demonstrates a very high standard of craftsmanship and design.

Although introduced to woodturning at school, he is largely self-taught and, after leaving school, he served a traditional apprenticeship as a cabinetmaker. With these skills at his disposal and a clear respect for the material, Mark has won a number of awards, including the Craftsmanship Award 2009 from The Crafts Council of Ireland.

His work is simple, pleasing and beautifully made. It is represented in both private and public collections. 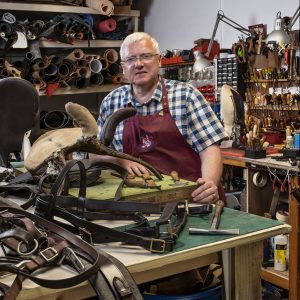 James began working with leather at the age of 13 and started training as a saddler over twenty years ago. Today he is a qualified Master Saddler and his work varies from equestrian tack to making and repairing leather goods. His commissions have included leather drinking vessels for museums, bible cases and briefcases. He recently worked with QEST Scholar Bob Johnston to make a Victorian basket saddle for a disabled child ensuring that he could enjoy the independence afforded by riding safely alone.

QEST provided the resources for James to attend the Side Saddle Manufacture course at The Saddlery Training Centre in Salisbury, where he was taught by Richard Godden, the only remaining side saddle specialist teacher. Side saddle riding is enjoying a renaissance throughout the UK and in particular in James’ native Northern Ireland where he is the only side saddle maker in the country. 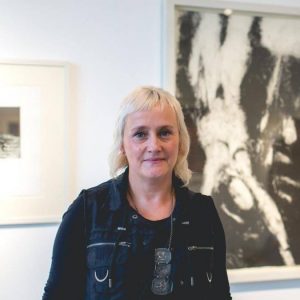 Karen studied Fine Art at both Belfast and Manchester. Specialising in hybrid printmaking, book art and sculpture; her work reflects an interest in habitat, architecture and literature. Using line and colour as a language to explore the parameters of printmaking, with symbolism as an allegory; deconstructing situations, fairy tales, nursery rhymes or poetry that are part of childhood and adult culture.

Karen his been represented in solo and group exhibitions both nationally and internationally to include Cannes, Germany, France, Luxembourg, America, Canada and Japan. In 2018 she was selected to join the prestigious Prism print international and was artist in Residence at Empreinte Atelier De Gravure, Luxembourg in 2019. She has received many awards and commissions from a variety of institutions and her work is represented in numerous public and private collections.