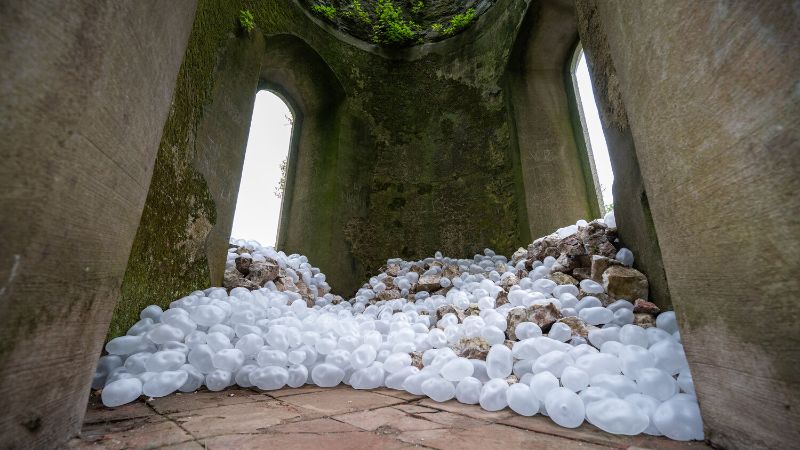 1845: Memento Mori is a famine memorial and glass installation of 1,845 blown glass potatoes dedicated to the 19th-century Great Irish Famine, created by Seattle-based Irish artist Paula Stokes.
1845 is significant as it references the year that the potato blight came to Ireland, marking the beginning of a period of mass starvation, disease, and emigration. Between 1845 and 1852, over 1.5 million people died, and 1 million emigrated to Australia, Canada and America. The form of the installation differs in response to specific locations, changing shape and volume depending on light, accessibility and exposure of each site.
At the Ulster American Folk Park it will be installed in the Single Room Cabin, which dates from the late 1700s to early 1800s and is an example of the type of dwelling occupied by many poor tenant farmers. It will be the only venue for the installation in Northern Ireland.
The fragility of the glass potatoes is representative both of the vulnerability and of resilience of those who died and those who survived the famine. Paula Stokes was born in Ireland butmoved to Seattle in 1993 to pursue a career in glass. Her glass work has been shown extensively both nationally and internationally. As a modern-day member of the Irish diaspora, Stokes’ glass installations reflect on her own history as an immigrant to examine historical events that have shaped the present.
She believes that ‘1845: Memento Mori will resonate with a wide variety of audiences as it reminds us of our own fragile humanity and serves as a connection between shared human experiences in the past and present’.
This project has been generously supported by the Thomas Dammann Junior Memorial Trust and is displayed in partnership with Craft NI for August Craft Month.